The key gameplay concept in Magicka is the ability to combine various elements to produce a variety of magic-based solutions applicable to destroying enemies and Monsters (and sometimes friends and NPCs too). These elements have certain rules that restrict which ones can be used with each other, as well as rules governing the end result of any particular combination of elements. There are eight primary elements that can be summoned at any time using the proper key. Three additional elements, beyond the primary eight, can also be formed by combining Water with either Cold, Fire or Arcane. Combining Water with Cold results in an Ice element, Water with Fire results in a Steam element, and Water with Arcane results in a poison element.

Certain combinations can be used with devastating effects against enemies (or allies, if you prefer). Conjuring a set of elements in a set order may enable the player to cast a Magick. When using a gamepad instead of keyboard, the right thumbstick is used to charge elements. For more detail on each element see Elements/Details.

In the original game, poison is a pseudo-element and a special case in that while wizards cannot normally use poison as an element; this element is actually not "unused" and several enemies have poison attacks. Poison attacks poison anyone hit (resulting in the poisoned status effect), slowing them and dealing small damage over time. The Bugs from the Bug Staff, poison spray from the Scythe of Malevolence, attacks from the Rogue's Crossbow, and attacks with the Cursed Blade and Morgul Blade all do poison damage (and can be used to make Poison Elementals with the Summon Elemental Magick). Elementally speaking, poison is weak to life

as demonstrated by Poison Elementals.

The sequel Magicka 2 originally did not feature any sub-elements in that the icons did not exist (though it can still be conjured by casting the respective elements, taking up two slots). An update to the game brought these two element icons into the game as well as poison.

element will change the Ice to Water, not the Water to Steam. Conversely, if you have [Steam

element will change the Steam to Water, not the Water to Ice.（The only possible way to make Steam and Ice coexist is by double enchanting, which means enchant one element to a weapon enchanted with another one.）

However, it is possible to add lightning

. This is because the fire turns the ice into water and the lightning is still there.

The elements in Magicka can be divided into different types based on how they influence the result of a spell. Each element type has a priority that determines the final type of spell that will be cast. For example, if the player casts an arcane element and a water element, the result will have the explosive beam properties of the Arcane element and the soaking effect of water. The result will not be a spray of water imbued with the arcane element, because the Arcane property has precedence over water. Note that while both Earth and Ice are projectiles (Earth firing a single projectile and Ice firing a barrage of ice shards), Earth has precedence over Ice; combining the two will result in the single projectile. 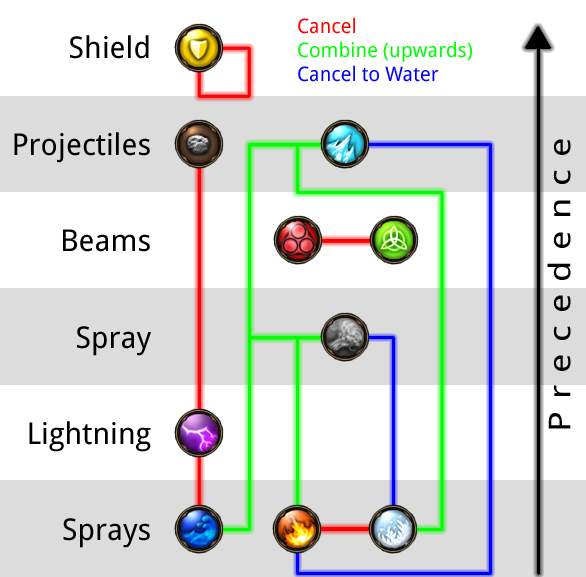