From Magickapedia
Jump to: navigation, search
This article is a stub. You can help Magickapedia by expanding it. 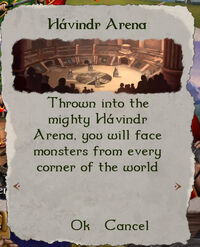 Hávindr Arena - Thrown into the mighty Hávindr Arena, you will face monsters from every corner of the world

The Hávindr Arena is a multiplayer map from Challenge mode which resembles a Roman Colosseum. As of the PvP update it is also a versus map.

Havindr arena features LOTS of ways to lose control of the wizard – from simple poison to being sent up into the air with great force, often meaning instant death. Please note: This guide is based around a solo run. These strategies may not be ideal for a team run, due to friendly fire. Useful spells:

Sapient Pearwood Luggages will randomly spawn and drop items and Magicks when killed. This is the list of useful ones:

Wave 1 Use Arcane Fireballs and Arcane Fireground against Orc Scouts. Use the second one when the orcs grab you.

Wave 2 Use the same spells, keep moving so the Giant Spiders can't surround and block you, making you vulnerable to Poison Spiders' poison spits. It isn't dangerous, but it slows you and can make you slow enough to be damaged by your own Arcane Fireballs!

Wave 3 Walk a bit into some direction when the Orc Berserkers jump, instantly start spamming Arcane Fireground when they're close to you. Knockback effect will unable them to move if you keep spamming. When Berserkers are dead, fight with Orc Scouts like in Wave 1.

Wave 5 Cast a full fire ward on you to be resistant to the Salamanders' fire breath, then fight like in Wave 2. When Giant Spiders are dead, you van use Arcane Frostballs and Arcane Frostgrounds. It's quite effective against Poison Spiders and really deadly against Salamanders.

Wave 6 If you have Thunder Bolt Magick, wet the troll and kill him with it. If you haven't got it, snipe the troll with Storm Ray or kill everything simultaneously using Energy Crystals of Doom (exposing yourself to melee attacks and area effect of your own crystals, but killing faster). Keep moving – the troll will perform a powerful hammer attack if you stand close to it and don' move, in some cases instantly killing you.

Wave 7 Cast an arcane ward on you, then kill Orc Berserkers like in Wave 3. When they're dead, attack the Disciples with Storm Ray. Wath out – shoot only when they aren't going to shoot their own beam because crossing them can make a big boom able to instantly kill you.

Wave 8 Quickly cast a full lightning ward on yourself, then attack the Malignant Beholders with Energy Cystals, Storm Rays or Thunder Bolt Magick. If they shoot a combination of water and frost bolts on you, quickly cast fire on yourself and run! It's very possible they're going to shoot a powerful energy bolt which sends the wizard flying and can kill him with one direct hit! If the beholders don't shoot, start to cast Storm Rays and Energy Crystals again.