Magicka is rather unique in its handling of multiple players. Up to 4 players can either connect via a network, or directly on one machine using a USB Gamepad.

There are currently two multiplayer modes in Magicka: Adventure mode is available for players who wish to cooperatively run through Magicka's storyline, while Challenge mode is for survivalists who want to test their skills against a large horde of monsters.

To create a multiplayer game one player has to host it. Others can join either via the server browser, by typing in the IP Address directly or via Steam. Searching for a game via a host name is currently not supported.

The host can choose to make the server private by filling in a password.

The adventure mode is identical to the singleplayer campaign and can be played by up to 4 players. With the Revive Magick dead wizards can be quickly revived, though with minimal health. If the entire party gets killed everybody revives at the last checkpoint with the Items they had then. If a player is killed by lava, drowns in deep water or falls off a cliff and is subsequently revived before the whole team dies, they lose whatever Items they were holding. The game host provides the savegame for everybody. All other members do not advance in their singleplayer campaigns but do get credit for any achievements that they unlock. If one player picks up a spellbook, the contained Magick is instantly available to all other players and this status saves on the hosts file/game.

In challenge mode the players either try to survive as long as possible against multiple waves of monsters (each wave is more difficult to beat than the last); or play a set short scenario mission with set objectives.

Currently, the only challenge mission scenario is Vietnam Rescue Mission, available through DLC.

According to the official website there is also a PvP battle mode in which players can fight against each other[1]. This was added as a free DLC on June 21st 2011.

Although players can heal themselves by self-casting,

the rate of healing is increased at least 200% when players heal each other.

Friendly fire is a very important mechanic to keep in mind when playing cooperatively with others, especially considering the amount of life players have compared to the damage done by most spells. Just a few hits from an area of effect cast can leave a fellow player dead.

Players can also unintentionally prevent their companions from using the

school by using any spells that wets their target; the Magicks Rain and Thunder Storm are particularly dangerous as they wet everyone in a very large area. Wet players are unable to cast the Magick Revive (

) to revive a fallen ally. This issue can be compounded if the player is unaware they are wet to begin with.

By firing one beam into another, the beams will merge. For two or more friendly players, the beams will join to form a vastly superior beam. For opposing human/npc players firing at each other, the beams will perform the classic power struggle. For beams consisting of opposing elements (for example, water and lightning, or life and arcane) the beams create an explosion at the point of crossing over. The explosion will have the properties of the beams. This can be used tactically to dispose of a big group of enemies for example by casting

. Player must take great care to cross only in a safe distance as an explosion like that easily kills the entire party.

A very powerful combination for two players is (

), which wets targets, freezes and shocks them. 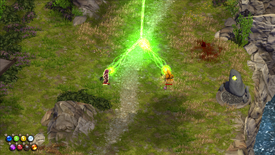 There are two achievements related to this aspect of gameplay:

Never cross the beams Cross opposite beams so that at least someone dies from it.