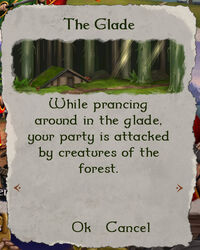 The Glade - Prancing around in the glade, your party is attacked by creatures of the forest.

The Glade is a multiplayer map from Challenge mode that resembles a clearance in a forest.

NOTE: Since the pvp update and the subsequent nerfing of a lot of spells, this guide is not as effective as it used to be. While it still works, I would advise that you experiment with other combos.

The glade features large groups of enemies in a wide open space. Because of the sheer size of some of the packs, beam spells are not recommended. The channel time leaves you vulnerable to attack, meaning you may be hit by a large volley of arrows, or a knockdown which may lead to fatal damage. This guide will take you though each wave, step by step. Please note: This guide is based around a solo run. These strategies may not be ideal for a team run, due to friendly fire. For ease, I will list some useful spells here and what I will be referring to them as:

Magicks drop randomly out of Chests. The guide will list where certain Magicks may be useful. But don't panic if you don't have the Magick listed, alternatives will be provided.

And some general tips:

The Goblin Rogues will try to grab you or do minor damage in melee. The Goblin Rangers will stand and shoot the moment they get in range. Gun them all down with Lightning Barrage.

Beast Raiders will jump at you so keep moving and they will miss, then turn around and blast them will a close range lightning barrage. The Beast Brute moves so slowly, he should never get into range. If he does get close, he will attempt to charge and knock you flying. He shouldn't hit you if you keep moving and a lightning barrage or two will take him out.

Handle the Goblin Rogues and Goblin Rangers in the same way as before. However this wave's priority target is the Goblin Bombers. These throw bombs that deal heavy damage and knock you flying, but they explode when set alight so use

to destroy the lot of them from long range and probably take a large number of goblins with them. If a bomb gets near you, you can push it way by right licking or Shift + right clicking with no spells queued to push them back. The Goblin Shaman is annoying, but he shouldn't pose a problem. He will try to wet you with water rocks so either put a water ward (

) on yourself or dry yourself whenever he does so. He will also use a fire beam, but will usually miss and barbeque other goblins.

Forest Trolls are big, slow but hit very hard and have a lot of hp. Slow them and then use lightning barrage or a blizzard ball (

) to defeat them easily. Your Ice spark wall maye also be used to great effect. Alternatively, wetting them and hitting them with a freezing beam (

will keep them frozen until they die.

Here you have some Beast Raider Alphas that have a lightning immunity aura to deal with. They behave a lot like the brutes you've already fought and their lightning aura doesn't protect them from your Lightning Barrage so gun them down. It does protect them from the Ice spark wall though. Handle the Beast Raiders and Beast Brutes in the same way as you did before.

Lot of Goblin Bombers so use the lightning and fire spell you used before and enjoy the show. Goblin Hoods and Goblin Ranger are essentially faster firing and more damaging versions of the archers you fought before. The same rules and strategies apply.

Orc Scouts are essentially Goblin Rogues with attitude. They will do hefty damage in melee and will try to grab you. The difference is that the orcs will hold you in place and leach health from you if they grab you. If this happens, use any spell featuring

as an AOE (Shift + Right click) to free yourself faster than hammering the space bar. They will also stop and shake themselves dry if you make them wet. Goblin Rogues and the Goblin Shaman should be handled like before.

This is where things get tricky. You have 3 Druids to contend with so pop your Druid protection aura that I mentioned earlier and go to town with your Lightning Barrage. Druids are the priority here but remember to renew the aura regularly. Druids can and will kill you incrediably fast without it. They also summon slow moving but tough Treant minions. They are slow enough that they can be ignored. You can also grab a dead druid's staff to summon some of your own, which works well as they are very tanky. You also get a large number of Beast Brutes and 3 Beast Brute Alphas, 1 with a fire immunity aura and 2 others with an aura which doesn't appear to do anything, but they will launcha quake in a straight line in front of them. Just dodge that and gun them down with your Lightning barrage.

Forest Trolls carry trees this time, which increases their range but they should be killed last because they are so slow. Just lightning barrage the Goblin Hoods and Goblin Rangers first.

3 Beast Brute Alphas that come with fire auras,making nearby allies immune to fire. There are also 2 Beast Raider Alphas that are the raiders we fought before and should be handled in the same way. They deal lightning damage but their damage appears to be only slightly higher. Orc Scouts are the same as before. However, the Orc Berserkers can be tough to deal with. They are much faster than their scout counterparts and carry large, 2 handed clubs. They will wreck you very quickly in melee so don't let them get that far! Blast them with lightning barrage from both close and long range. If they get close, slowing them or using

can be useful if your not quick enough to make a lightning barrage to kill them outright.

Goblin Rogues will die quickly and in large numbers to Lightning barrage.Goblin Bombers mean you use fire and lightning to blow them up easily.Beast Raiders and Beast Raider Alphas mean you have to keep moving to avoid being knocked down. One of the alphas is water based and will wet you if your hit so dry yourself to avoid taking more damage from the other alpha who is lightning flavor.

Beast Chieftain - Ok, Hes big and stompy and if you let him into melee, he will tear you apart. He does a quake that knocks you down around him and he does an even longer range one in front of him, which will allow his helpers to pick you apart and get him into melee range. Just stay far away from him until you've killed everything else and blast him with long range beams or

Projectiles. The other enemies are nothing new or special.

1 Goblin Shaman and then alot of Goblin Rogues, Goblin Hoods, Goblin Bombers and Goblin Ranger. Take out the bombers with your fire and lightning spell, then spam lightning barrage to finish everything else off. This shouldn't pose a problem for you.

Beast Brutes and Beast Brute Alphas. This entire wave is slow, so you shouldnt have much bother.

Goblin Hoods pepper you with arrows from long range while the fast Beast Raider Alphas keep you locked down. Thats the plan anyway. Just keep moving and lightning barrage anything that moves.

4 Goblin Shamans and 8 Forest Trolls. Due to the sheer number of trolls, it can be hard to avoid them all or to shoot at the shamans, so don't bother trying to target the shamans until you've thinned the trolls out a bit using Lightning barrage. If the oppotunity comes to take out a shaman, do so. They are the bigger threat.

Orc Berserkers will rush you, forcing you to take them out first. Its worth using

to slow them, while you take them out with lightning barrage. Then, you should kill the Goblin Bombers with your fire and lightning spell or conflagration. Finish off the orcs and archers with Lightning barrage.

You've got Beast Raider Alphas and Orc Berserkers that will rush you, so spam Lightning barrage like you never have before, possibly employing a Ice sparkwall on the berzerkers. The berzerkers will close in on you, making it hard to avoid the alpha's attacks. If you get hit once, it will be hard to recover so the plan is to reduce the berzerkers to giblets before they get close. After that, you have some fire immune brutes and some orc scouts which shouldn't pose a problem.

This is it, the finale. You have a chieftain, 4 brute alphas, 2 raider alphas (one who will make you wet), 3 trolls and most importantly, 4 druids and their accompanying minions. Your druid protection aura should be up all the time. However, precision is key here. The raider alphas will most likely die first since they will be in there first. The rest of the combatants (apart from the druids) can be avoided and ignored. By now, hopefully, you have some idea of their charge range and should be able to move to places to make the brutes a none issue, allowing you to focus on the druids. After the druids, come the brutes and any left over druid minions, which should all be killed with lightning barrage, while staying as far away as possible from the chieftain. The Chieftain should then be taken down with long range beam or projectile attacks.